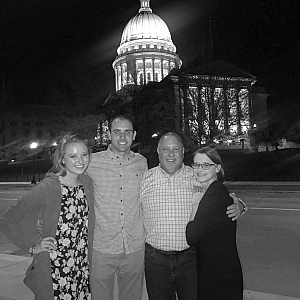 Eric Quinn & Palmer Johnson met way back when, in 1990 in St. Louis. Eric's first day started with a wild ride on the party bus up to a year-end PJ meeting in Door County, Wisconsin. Fortunately, that suds-soaked weekend didn't drive him away.

Eric, a University of Michigan engineering grad, started in St. Louis in outside sales. From there, it was on to a Regional Manager position, then a move up to Madison and the well-deserved role of Vice President of Business Development, a role he's held for the last 12 years. I say this all the time when I talk about Eric – what you really need to do is pick up a PJ line card and have a look at the vendor logos. Eric is responsible for most of those. It's hard to imagine what PJ would look like without his contribution over the years. ZF. Carraro. Axletech. Cotta. Durst. Rexroth. Transfluid. Kessler. Dana Spicer (second time around!). New Eaton territory. Expanded Wichita territory. Expanded Funk territory. Etc. Etc.

And these are just his recent accomplishments. Before focusing on vendors, Eric was a force in sales, truly one of the best, most relied upon product experts in PJ, pretty much an encyclopedia.

There's no question, Eric poured passion into his work and focused his immense talent on making PJ bigger and better. The proof is in the pudding!