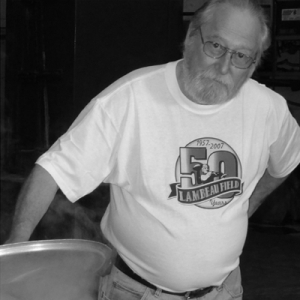 Tom is PJ’s original service tech and still owns the tenure record at PJ. He actually started at Palmer Johnson in Sturgeon Bay at the yacht yard, before there was a Palmer Johnson Power Systems.

The following TOP 10 list ran at the time of his retirement from PJ in 2011.

1. Tom currently holds the honor of being the longest term employee PJ has ever had – 33 years!

2. Tom was the first service technician that PJ ever hired.

3. Tom is admired for his speed and accuracy when he is working on a job, and his knowledge base spans the full array of PJ products.

4. Tom has worked at 3 separate PJ locations, starting at the shipyard in Sturgeon Bay.

5. Tom has been the cook for all of the shrimp boils that we have had in Sun Prairie. We don’t recall how long we’ve been doing it, but it’s been longer than 20 years!

6. Tom has traveled around the world for PJ, including trips to Egypt, Denmark, New Zealand and the Virgin Islands.

7. On his way home from the Virgin Islands, Tom was trailed by the FBI all the way to Chicago – they thought he was a drug smuggler!

8. Tom has been the resident Hamilton Jet expert since 1990, handling all sales and service inquiries and issues.

9. Tom shared a room with John Lewis when they were at a Hamilton Jet trade show in New York City, and neither one has ever been the same.